EVERY PATTERN HAS A STORY: PARISIAN-INSPIRED FOLLOW-UP TO IVÁN MEADE FABRIC LINE 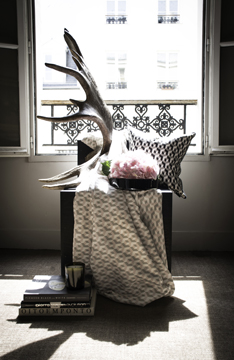 France, its people, and their way of life have always intrigued and inspired Meade. For the latest release of his eponymous fabric line, Meade continues his personal narrative with a distinct je ne sais quoi. To perfectly capture his vision, Meade used the Parisian influence to photograph this exciting new line in a beautiful French light.

Mariposa is an ode to Meade’s beloved mother, Maria Celia, and embraces her style of modern interpretations of old classics. The traditional toile-influenced motif when printed against a soft, Rosa background creates an unexpected beauty.

Vista Hermosa is inspired by the tile patterns in Meade’s grandparents’ neoclassical home in San Luis Potosi and is all at one geometric, feminine, and modern. Reminiscent of lace or leatherwork, it is a versatile, mid-scale pattern.

More details on the fabrics — including the new patterns and colourways — can be seen online athttp://www.ivanmeade.com.